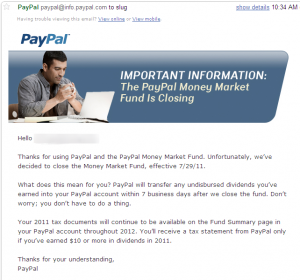 I received the email this morning.  This was only a matter of time I suppose.  I remember when PayPal rates were competitive with ING.  According to a SmartMoney article:

“Due to market conditions, financial advantages of the money market fund have diminished for our customers,” said a PayPal spokeswoman. Advantages for the company have diminished, too. Although the fund’s 0.04% return placed it among the top retail money funds, according to iMoneyNet, PayPal was running the fund at a loss to maintain positive returns for its investors. (While the fund shows a 0.22% expense ratio, its expense ratio before the waivers was actually 0.87% last year.) It’s a problem plaguing the entire money market industry amid low interest rates that rarely eclipse fees, and declining assets as consumers move money out of such funds and into FDIC-insured accounts.

So, it's time to take your PayPal balances down to nil or alternatively I've heard there is a feature called  Auto Sweep where PayPal will automatically transfer the balance out to an external checking account each night. Apparently you must contact PayPal directly to enable it.  For me, I always pay by credit card through PayPal for the rewards.  Suit yourself, but don't put a lot of $ there when it can't be working for you.