I'm sure by the title alone you can tell this is going to be one of my most read posts of the year.  I expect it will be picked up by most of the blog personal finance aggregators as well.  I mean why read 5 Tips for Preparing Your Home for Sale or Yet Another List of Reasons Why Bank of America Sucks when you can delve with me into a 60 page academic article from the Federal Reserve Bank of New York entitled Do We Know What We Owe? A Comparison of Borrower- and Lender-Reported Consumer Debt by Meta Brown, Andrew Haughwout, Donghoon Lee, and Wilbert van der Klaauw.

OK enough with the sarcasm.  To be honest, for an academic article, it's really digestible and informative.  It's worth reading!  It speaks to one of the key questions that arise when considering survey data on personal finance topics:  how truthful are these people about what they share?  The answer as it turns out is that people seem willing and able to give a pretty accurate picture of their consumer debt, at least in the instrument referenced in this study.  The one area where they do a not so good job of representing their debt involves, not surprisingly, credit card balances.

But, I'm getting ahead of myself.  Let me briefly address the difference between primary and secondary sources.  In this case, the primary source of data is Survey of Consumer Finances (SCF).  This is a survey that is conducted in-person or by phone by the Federal Reserve every 3 years with a large sample of households across the US (sample size in excess of 4,000).  The secondary data in this case comes from Equifax who essentially anonymizes about 40 million household credit records quarterly in a database called the Consumer Credit Panel (CCP).  Currently, there's about 11 years worth of data.  What an awesome dataset!

The gist of the current report shows that after you account for the many differences in sampling and data collection, the consumer debt levels reported in the SCF line up astonishingly well with those in the CCP (except in the area of credit card debt). 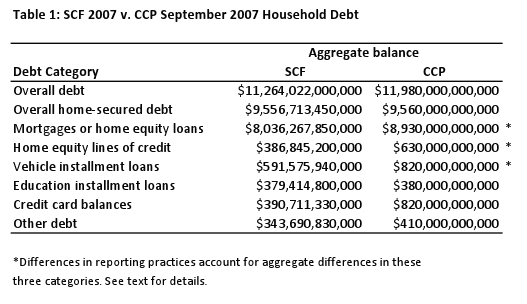 The team of researchers do an admirable job of trying to account for the differences including by adjusting for credit card deadbeats like me who use my credit cards for everything to get cashback but never carry a balance.  In the SCF study, I would report my balance as $0, but someone like me in the CCP database would show up with a reasonably large balance.  Regardless of all their adjustments however it seems that respondents in the SCF under-report their credit card balances by about 1/3 to 1/2.  Either by ignorance or intentional omission, this data when self-reported is simply not shown to be as reliable as other debt reporting.  All in all though, it made me feel better about survey research or at least about the SCF.

What about you?  Have you ever lied on a survey about your debt level?  If so, what was your reasoning.

PS  A shout out to Dan Ariely whom I used to work for long ago and whose work is cited on page 30.