I am not in the market for a CD right now, but if I were, I would certainly be heading to PenFed.  PenFed CD rates, even on short term side are looking strong.  The 2 year at 1.41% is really nice.  Actually, it bums me out a little since I had to settle for a 1% rate on a PenFed CD back in September.  I really wish these rates had been available back then.  PenFed would probably have gotten more than just a grand of my cash as well.  I haven’t done the math to know whether sacrificing the 2 months of interest and starting a new CD at 1.41% would pay off more.  My guess is that the difference is nominal considering it’s only a $1,000 and would likely not be worth the time it would take to work that out through a PenFed CSR.

It is tempting though.  I certainly can’t see my money market account rate moving beyond the 1.41% interest level in the next two years unless the economic recovery really takes off and inflationary pressures take hold.  In that case I’ll still be happy since savers will finally start to be rewarded for their efforts again.  These PenFed CD rates are a solid start though.

Note the very short term 6 month (.3%) and 1 year (.75%) rates are terrible considering I’m already earning 1% in my money market so I am not recommending those at all.  Apparently PenFed isn’t either considering they did not include them in the promotional email I received. 🙂

Remember that to take advantage of these great PenFed CD rates (and their decent rewards credit cards and useful car buying program) you must be a member.   All of the details are available at the PenFed website. 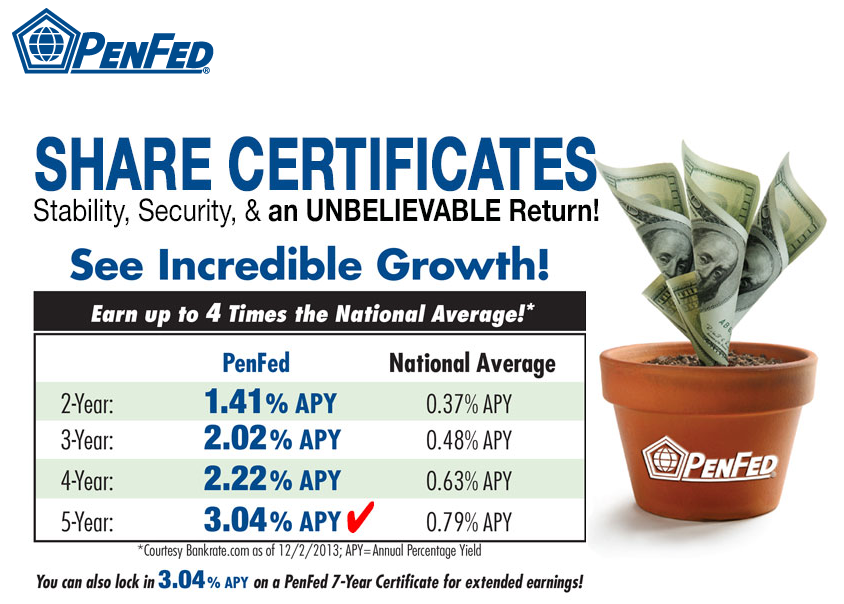