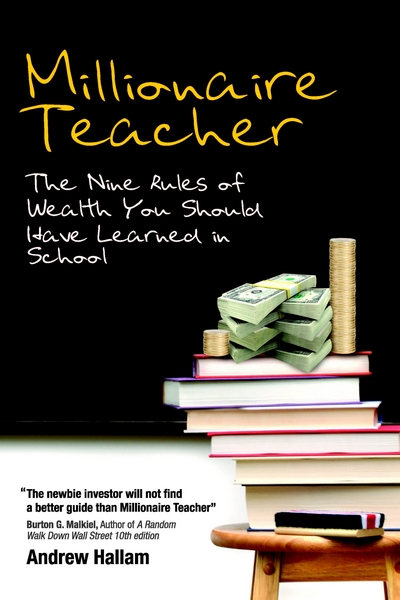 When Andrew Hallam emailed me to see if I would review his book Millionaire Teacher – The Nine Rules of Wealth You Should Have Learned in School I didn't know what to think.  Aside from being flattered, I was a bit mystified.  I mean, my blog's tone tends to be snarky, my word choices are irreverent, and I dress more like someone who will sneak into your house and slit your throat so if you're asking me to review your book, you're either very brave or you didn't do your homework.  From what I've learned of Andrew, I think it must be the former.

One thing I want to note before I dig in…The first is that I did not read other reviews of this book.  I don't want my message tainted by the thoughts of others so you can be assured that what you're reading is my opinion only.  If it's consistent with others, that's great.  If it's not, then we can chalk up yet another example of how I just don't fit in.

The book is very readable.  It is highly accessible to personal finance novices by using easily understood language and examples.  Credit goes to Andrew for having his book read by this kind of audience prior to publication so that he could make any necessary changes.

I really like that his initial focus is on understanding your spending.  In many of the forums I too often read about people with poorly controlled spending who want to start investing.  It is hard to start investing until your fiscal house is in order, and this comes across well in the book.

I can also appreciate his approach to frugality at a young age.  When you are single with no children and only yourself to worry about, you can live very frugally.  Andrew was a bit compulsive about it, and you see where it helped to get him.  I think the key here is that he has also adapted to life post-extreme frugality.  That is, he seems to have moved on to a point of cost-consciousness but within reason.

The highlight for me though is the crucifixion of actively managed funds and the parasites who try to pimp these out to you so they can leach away your weatlh.  He assaults them from every logical and rational angle.  If you read this book, and still want to put money in actively managed funds, you are simply an idiot.

"The best weapon against exploitation is education."  I could not have said it better.  It really speaks to not only the value of educating yourself about personal finance but also implies that in the end it is your personal responsibility.  There are so many people out there looking to come between you and your money, and Millionaire Teacher is a great tool to help you keep as much of your money as you possibly can.

There were a couple of occasions where I think opportunities were missed.  The first is a discussion of trailing stops.  It might be a bit too advanced for this book, but it is certainly an effective way to reduce volatility and prevent big losses.  For example, Apple has been on quite a run.  In order to protect my gains, I set a 10% trailing stop on my shares.  That is, if Apple falls 10% off of its peak, my trailing stop order will trigger a sale.  In fact, it just did that about a week ago and my gains have been safely sitting in cash while Apple and the rest of markets bounce all over the place.  A discussion of trailing stops would've been nice to see, but like I said, it might be a bit too advanced.

The other missed opportunities are less forgivable, especially with me as the reader.  Let me give you another example.  My Schwab account has about $1,800 in it.  All of it is in Schwab ETF's.  What's my point?  It was all free.  I used a rewards credit card sponsored by Schwab to get 2% cash back on my purchases that were then placed into a Schwab brokerage account which I then used to buy shares in Schwab ETF's commission-free.  And, of course, I never carried a balance on the card.  How is this a missed opportunity?  Well, Andrew does not discuss commission-free ETF's and even worse he does not discuss credit card rewards.  For someone dedicated to maximizing personal finance these have to be in the discussion.

I knew going in that this was a book focused more on those beginning their personal finance journey.  So, as I was taking notes in it, I was thinking of my son and addressing my notes to him.  I found myself agreeing with Andrew time and again on the value of starting early, on keeping your comparison set reasonable, on tracking your spending, on running away from anything actively managed and re-balancing in a rational manner.  There were places as I noted above where I had many notes because I felt there was more to say, but most of the time I was underlining passages or simply writing "Yes!"  In a few years when my son is heading out on his own, I think this book will certainly be among those I send with him on his own journey.  Thanks again to Andrew for the opportunity.

Have any of you read his book?  What did you think?